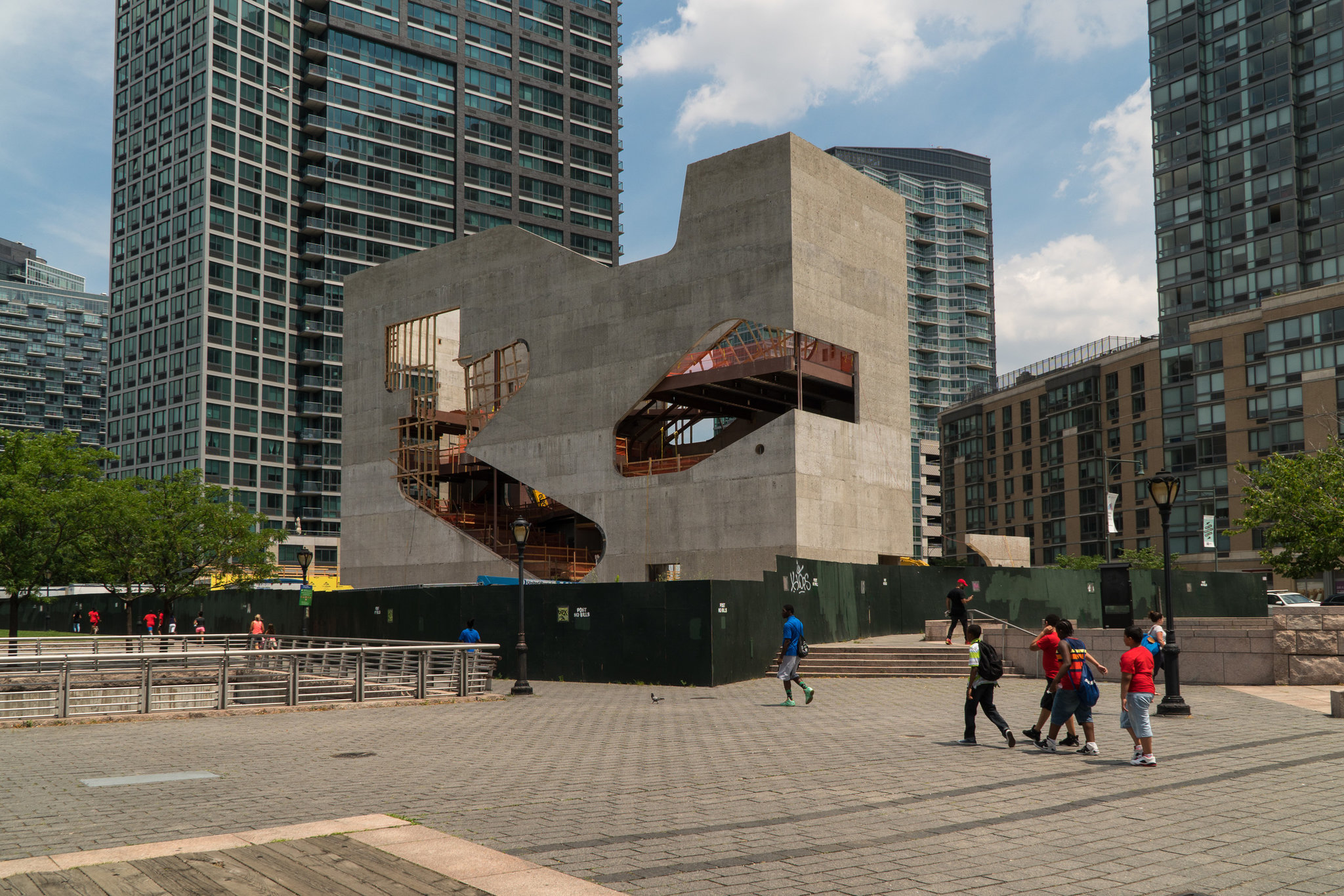 Standing at a 29th-floor window of a skyscraper on Third Avenue in Midtown Manhattan, Dennis M. Walcott was deeply impressed last week when he spotted the newest branch of his library system under construction.

Mr. Walcott, it should be said, is the president and chief executive of the Queens Library.

What he could see so clearly was the Queens Library at Hunters Point, across the East River and a mile away, in Long Island City.

“You talk about the pride of the borough of Queens,” said Mr. Walcott, who was a deputy mayor and schools chancellor in the Bloomberg administration.

Neighborhood libraries are not typically foreground buildings. It is telling that the latest addition to the New York Public Library system occupies the basement of a 50-story condominium tower in Manhattan in which one apartment sold for more than $23 million.

But the $38 million Hunters Point library, designed by Steven Holl Architects, already occupies the foreground, even though it is at least a year from opening.

This 81½-foot-high concrete box, pierced by enormous gummi-shaped cutouts, has staked its place on the waterfront, between the landmark Pepsi-Cola sign and the long-legged Long Island Rail Road gantries of Gantry Plaza State Park. It will not suit everyone’s taste. But no one will overlook it.

“A public building has to have a presence, has to be a beacon,” Mr. Holl said Monday, as he led a hard-hat tour through the great concrete shell, which is not just a facade but a load-bearing structure. (There is only one interior column.) The cutouts are angled and situated to take advantage of unobstructed views of Manhattan.

“These are not gratuitous shapes,” Mr. Holl said. “These are expressions of the inside, looking out.”

The principal diagonal void on the riverfront facade marks the location of what will be a grand staircase paralleling the tiered adult reading area. The panorama includes the two new “dancing” American Copper Buildings, the stately United Nations Secretariat, the monolithic Trump World Tower and the cloud-piercing 432 Park Avenue.

“This will become a tourist attraction itself,” said Feniosky Peña-Mora, the commissioner of the city’s Department of Design and Construction, as he admired the scene. His agency is managing construction of the library.

Opposite the adult reading area is the children’s area, visibly expressed at the south end of the structure where an entire chunk of the corner seems to have been sliced away.

These two reading areas are separated by a central atrium that is more than 60 feet high.

Under the adult reading area will be a community meeting room. Above it will be the teenagers’ area. On the opposite side of the atrium will be a small cyber center and cafe. There is also a stepped roof terrace. The concrete exterior will be painted silver.

Conscious of the threat posed to the Hunters Point peninsula by hurricanes and tidal surges, architects and engineers set the base of the library one foot above the 100-year floodplain (an area where the probability of flooding is one percent in any given year).

No one in Mr. Holl’s entourage was more appreciatively wide-eyed than Councilman Jimmy Van Bramer, a Queens Democrat who said he had been fighting for a Hunters Point branch since 1999, when he worked at the Queens Library.

Through the mayoral administrations of Michael R. Bloomberg, a Republican turned independent, and Bill de Blasio, a Democrat, the library project started and stopped, died and revived, Mr. Van Bramer said. It had to survive the stormy months in 2014 that led up to the firing of Mr. Walcott’s predecessor, Thomas W. Galante, over his spending practices.

The feeling at City Hall, Mr. Van Bramer said, was that Long Island City did not need much more than a one- or two-story box, in spite of the fact that Hunters Point was filling with apartment towers, and the towers were filling with young families.

“I said, ‘We’re not building for who’s here today but who’s going to be here in the future,’” Mr. Van Bramer recalled.

Drawing on the discretionary funds that are made available to members of the City Council for the support of nonprofit organizations, Mr. Van Bramer said he directed $15 million to the Hunters Point library over several fiscal years.

“It’s the single most important project of my career,” he said. Mr. Van Bramer credited two neighborhood advocates in particular for leading the fight: Don Dodelson, the first president of the Friends of the Hunters Point Library, and Fausta Ippolito, an elementary schoolteacher and mother of two, who died in 2011.

Ms. Ippolito was very much on Mr. Van Bramer’s mind during the visit on Monday, his first inside the library. While everyone else took in the impressive volumes and astonishing views, he seemed preoccupied by the question of which of these spaces, now taking form in raw steel and concrete, would one day bear her name.